R#n No. 1312 Thursday 7th July 2022
Hare: Brazilian (and Johnny Fuckacarass has been nominated to do the r*n report)

Cost: $20 - food provided, buy own drinks over the bar

Because two emails in one week seems not quite enough... 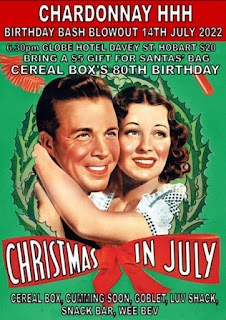 Chardonnay's Off With Her Head Trail

Cost: $20 - food provided, buy own drinks over the bar

Grand Master - This is a Honourary position and should be given in recognition of the contribution that this person has made to Chardonnay. The Grand Master is the figurehead of the club and only guides the JMs if necessary.

A GM should be a Chardonnay hasher who has achieved over 200 runs and has been active over the previous year.

On Sec - This hasher is responsible for the weekly production of the Hash Trash, either by electronic or printed production.

Hash Cash - This Hasher has the responsibility of collecting monies from Hashers on a weekly basis. This Hasher also pays the bills, food, grog etc. All monies going in and out are to be accounted for. This Hasher also keeps tabs on run numbers, individually, for the club and badging. Badges are then given to the Grand Master to present when milestones are achieved.

Hash Lips - These people are responsible for running the Hash Circle. They highlight events on the run or humourous events involving hashers during the week. They are to be mindful of Chardonnay tradition and insist that all skols should be of cheap wine and the black box should be in use for milestones and major misdemeanours. Above all else they should make us laugh and sing, and should be given respect during the Hash Circle.

Trail Master - This Hasher is responsible for the organising of hares for weekly runs. This Hasher should also ensure that the hasher setting the run knows what they are doing. It is not acceptable just to organise who sets the run. One should consider varied terrain to run in, and using experienced Hares to help guide newer members when setting runs. The setting of a good trail is the most important part of a Hash event.

Hash Horn - Is about being loud on the run so that the slower runners can hash and catch up. The Horn should not be squeezed when not on trail. This hasher should not hash, but try to stay near the middle of the pack so that others may benefit from sounding of the horn.

Hash Flash - This Hasher has the responsibility of taking photos of hash activities during the run and the lip session, later uploading them to Chardonnay's Picasa web albums. To receive an electronic version of the Trash, e-mail chardonnayh3@gmail.com

Run venues are generally within 20 minutes from the Hobart CBD. Pack size is around 40, with a good mix of runners and walkers. Trail length is around 45 minutes to an hour.

Current cost is $15 for a BBQ run and $20 when running from a pub. Always BYO drinks (or BuyYO if from a pub).

To post to this blog, send an e-mail (text only, no pics) to: chardonnayh3 (dot) chardyblog (at) blogger (dot) com